READ! Working Out the Differences

Please Complete the Form Below to Receive My Free Newsletters

Working Out the Differences

“I have never coached girls, I have learnt a lot”, this was a comment made by a coach who had said earlier in discussion that he had approached the female players ‘just as footballers’. The subtext being that he was wrong to do this.

​I have an opinion and a tendency to react, unable to hide my displeasure at situations or people. As I mature, I am learning more effective ways to manage this. I learnt a lot about restraint when I was a player. Careful of what I said to officials and mindful of my own physicality, once I grew to appreciate the art of ‘barging’ and the professional foul. I played for 20 years and was cautioned 3 times. The game taught me how to manage my reactions, and how my management could have a positive or negative affect on my performance. I learnt that I could still be a strong player and strong personality without    reacting in a negative way. 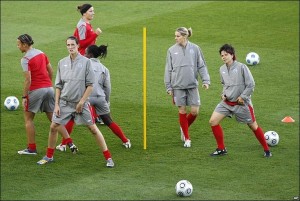 The difference is me.

The FA have introduced some fantastic courses and published guidelines for coaches. The emphasis on an Age Appropriate approach to coaching is vital to our development in the game. I do not think that it is a coincidence that there are no courses or guidelines on coaching male or female players.

​​​​I considered my response in discussion with this coach.

​”Maybe the difference isn’t that you’re working with girls, but maybe your attitude has been different” this is what I said. I was annoyed and I think that this showed in my tone of voice. I was annoyed because I think that for a coach to hold this opinion, they have to work pretty hard not to demonstrate this opinion through their treatment of the players.

Not every female player is the same as the next, the same for male players.

The coach can foster a self-fulfilling prophecy. The coach sets the tone for what the player experiences. This could be the difference between a player realising their own potential or meeting possible restrictions conceived by the coach.

This Article Was Published in Total Football magazine